Definitely a highlight in terms of contemporary art I've seen in NYC so far. The PS1 museum is in Long Island City in a large industrial building. I had so much fun exploring in this space. Many of the exhibitions are interactive.

Upon entering the lobby one is confronted with a woman's voice faintly shouting 'I am a worm you are a flower!' in a German accent. You have to look around before realizing that the small video work is installed in the floorboards of the corridor. It's Pipilotti Rist's video called 'Selbstlos im Lavabad (Selfless in the Bath of Lava' (1994). Such a playful and amusing work. I've heard about it before, and was glad to see it in the flesh. (Pipilotti Rist: ‘Selfless in the Bath of Lava’)

Another playful interactive installation is Surasi Kusolwong’s ‘Golden Ghost (The Future Belongs To Ghosts)’ (2011). With this work the artist invites viewers to enter into a room filled with a deep layer of industrial thread waste to search for gold necklaces hidden in the piles of cotton. I searched in vain. Apparently no one has found a necklace in this installment of the work. There were however a few lucky viewers who found necklaces at the piece’s previous installation in Manhattan. (Surasi Kusolwong: ‘Golden Ghost’)

I was thrilled to see an installation of collages by South African artist William Kentridge installed in one of the staircases of the museum. The silhouettes of of people walking works wonderfully in the industrial staircase. (William Kentridge: ‘Stair Procession’)

Cifford Owen’s series of performances, entitled ‘Anthologies’, are beyond bizarre. Some of it reminds me of Carolee Schneemann’s 1964 performance ‘Meat Joy’. In one piece the artist walks around a room filled with silent audience members with their backs turned against the walls. Owens then walks around the center of the room, seeks out a single audience member (with eye contact firstly) and then starts interacting silently – and VERY intimately – with him or her in a series of caressing gestures. He either touches an arm, neck or face, breaths into a neck, lightly kisses cheeks or lips and even french kisses the chosen viewers. The video even places the secondary viewer (the viewer watching the recording of the live performance) in an uncomfortable space. (Clifford Owens: ‘Anthology’)

My favourite work was Darren Bader’s installation ‘Chicken Burrito, Beef Burrito’. Two fresh burrito’s lie on-top one another in the windowsill of a single empty room in a corner of the building overlooking a busy street corner of Long Island City. The first few seconds of Bob Dylan’s ‘Like a Rolling Stone’ plays looped on overhead speakers. The installation has an strange feel-good quality to it. (Darren Bader: ‘Images’) 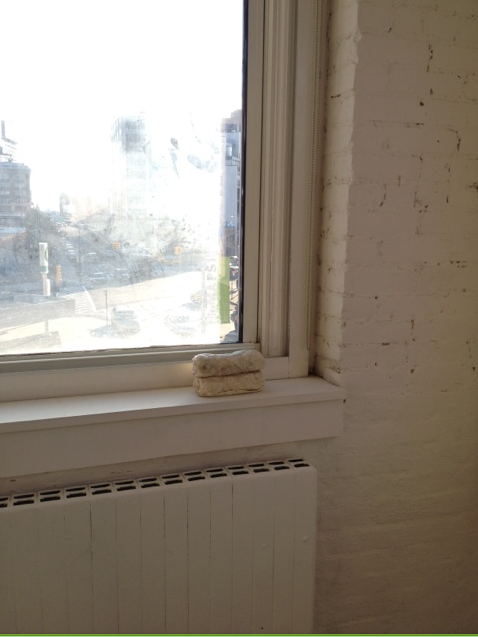 I’d love to return to MoMA PS1 in the summer time when the museum houses their famous ‘Warm Up’ sessions. The museum also has an amazing book store. I spent a long time drooling over contemporary art and art theory books that I should not buy (due to luggage constraints). Wish I could live there!